MAN Truck & Bus Iberia has won two awards at the National Transport Awards 2022 in Madrid: The NEOPLAN Cityliner Platin special edition and the new MAN Lion's Intercity LE were voted "Coach of the Year in Spain" and "Bus of the Year in Spain". The prices are awarded by a jury consisting of bus and coach operators and technical experts. “Safety, reliability, comfort and economy, extraordinary flexibility”, have made the jury to award MAN and NEOPLAN with these two prices.

The National Transport Awards are organized by the Spanish trade magazines "Transporte 3" and "Viajeros". The jury is made up of customers and industry experts from Spain, including mainly managers from public transport and bus companies. "Accordingly, the importance of the awards for us is high. After all, the jury members know what the needs of markets, entrepreneurs, drivers and passengers are and which vehicles can serve them perfectly," said Stéphane de Creisquer, Managing Director of MAN Truck & Bus Iberia.

engine matched with the new ZF EcoLife Coach 2 six-speed automatic transmission. Because especially in situations which require frequent shifting within a very short time due to constant braking and powerful acceleration, the transmission can convince thanks to its high efficiency. The vehicle is equipped with the active, electronically adjustable MAN Comfort Drive Suspension (CDS) damping system, the turning assistant with active warning function and pedestrian detection, and MAN OptiView – the camera system replacing the mirrors. 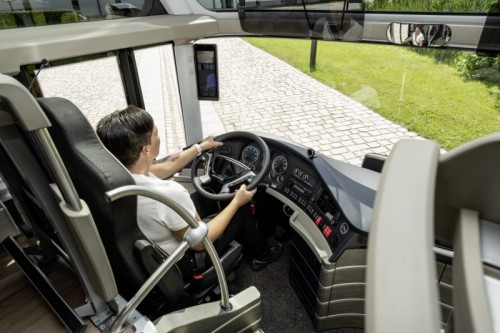 After winning the 'International Coach of the Year Award 2022', the prestigious price from the International Coach and Bus Jury, trade journalists from 22 European countries, awarded after a week of extensive testing in Slovenia, now MAN and NEOPLAN strike again. "We are incredibly proud on wining these awards. After all, the NEOPLAN Cityliner is continuing its success story after being voted 'International Coach of the Year’ in its 50th anniversary year, whilst the new MAN Lion's Intercity LE is now beginning its success story", said Rudi Kuchta, Head Business Unit Bus at MAN Truck & Bus.

The success story of the NEOPLAN Cityliner began five decades ago. The price winning "Platin" special edition was launched to mark the coach's anniversary last year. It has a powerful Euro VI 6-cylinder 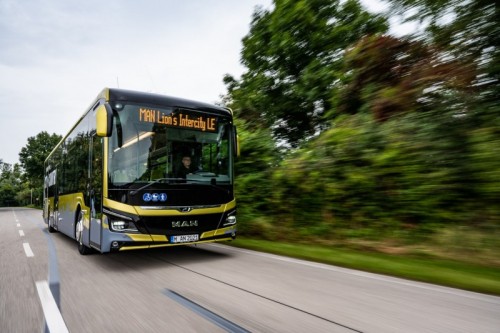 The new MAN Lion's Intercity LE is a combination of the rear end of the high-floor Lion's Intercity with the low-floor front end of the current Lion's City. MAN says the advantages for intercity use are that more seats can be accommodated in the direction of travel, particularly in the rear section, and also the less complex and therefore more cost-effective hypoid axles can be used. The modular design is according to the manufacturer cost effective and allows three intercity-oriented and three city-oriented versions to be flexibly configured. The new MAN Lion's Intercity LE impressed the jury with its flexibility and efficiency.