Electric and hybrid buses: new fire risks and how to spot them

Regulation 107 – enacted by the United Nations Economic Commission for Europe (UNECE) to enhance the safety of buses and coaches – makes it mandatory for commercial combustion engine vehicles to have a fire suppression system installed. Jonas Bergström, business manager in Dafo Vehicle Fire Protection’s bus and coach division, notes that under the regulation, it is not mandatory for vehicles without combustion engines – such as EVs – to be equipped with automated fire suppression systems. He sees a potential danger and discusses in this article how vehicle operators can reduce these risks effectively.

Regulation 107 does not address the fire risks associated with electric vehicles (EVs), or the electric risk element of hybrid vehicles (HEVs). These vehicles – often powered by lithium-ion (li-ion) batteries have considerably different risks to traditional combustion engine vehicles. Jonas Bergström emphasizes that, should a fire occur, an external system and the manual extinguishing function will need to operate alongside one another, which can increase risk of fire spread and prolong periods of downtime. Referencing the potential risks posed by EVs and HEVs, UNECE Regulation 100 (Construction and Safety of Electric Powertrains) recommends – when there is a risk of thermal runaway – an early warning system is necessary to act in the event of a failure in the battery and/or its rechargeable electric energy storage system (REESS). In line with Regulation 100, to detect potential battery failure at the earliest possible stage, fire suppression systems can be used as an additional safety device to release a cooling agent to minimise risk.

The most common risk associated with li-ion batteries is thermal runaway. This is where a malfunction in a battery’s cells – as a result of overvoltage, physical damage, overheating or overcharging – causes rapid temperature increases, which can lead to fire, toxic gas emissions and large explosions. Once thermal runaway is underway, any automatic system shut-down will not extinguish its progress, the fire can take days or even weeks to fully extinguish using excessive quantities of water. To address thermal runaway, an early fire warning system, supported by spot cooling, can be used to detect thermal runaway from occurring, while localising and suppressing the fire risk. One key difference is the location of potential risks. For internal combustion engine vehicles (ICEs), these are generally located in the engine compartment. However, for EVs and HEVs, there are a number of additional risk areas, meaning further protection zones need to be put in place. 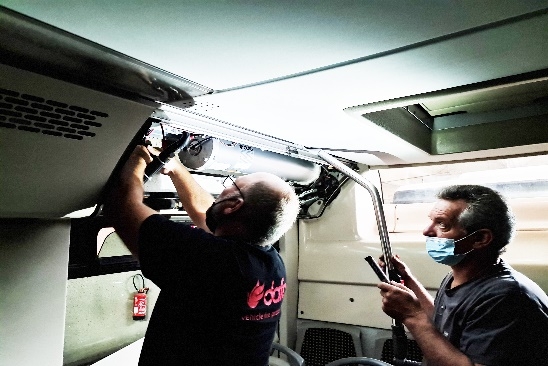 The Research Institutes of Sweden (RISE) offers a fire risk management assessment, which can be used as a guide to minimise risk for electric buses and coaches. This includes: Hazard identification; Risk estimation; Risk evaluation; Risk reduction. Those risks needing to be addressed are then translated into an action plan, which stipulates the appropriate risk reduction measures, such as: Risk minimisation or elimination by design; Active and passive fire protection systems; Improved maintenance and cleaning procedures; Improved training and quality procedures.