42 MAN Lion's Citiy in service in Hungarian Veszprém (by www.magyarbusz.info).

Last December MAN started the delivery of the MAN Lion's City 12C EfficientHybrid to the Hungarian city Veszprém. The first 20 solobuses entered service just before Christmas. In total V-Busz Veszprémi Közlekedési Kft. ordered 42 new vehicles, including 14 articulated buses which will be on the Hungarian streets this January. The order was given to MAN in June 2021. Also coming May the fleet will be completed with the launch of five electric MAN Lion’s City 12 Es purchased under the Green Bus Program.

In Veszprém, situated approximately 15 km north of the Lake Balaton, there was in January 2019 a change in service provider. The new public transport operator was until now obliged to use used buses collected from numerous places and manufacturers due to the short time available. With the acquisition of brand new MAN's, the fleet will be replaced by one of the most unified and newest fleets in Europe, according to Hungarian media site Magyarbusz, with the exception of a few older buses left behind - three previous generation MAN Lion’s City and four Neoplan N4522 Centroliner. To celebrate the new arrivals the operator has granted free travel on the MAN's. The solo buses are equipped with three full-width, two-lane doors in a 2-2-2 layout and pneumatically operated inward-opening and have 67 standing places and 29 fixed passenger seats, two of which - the front-facing seats on the front wheel drums - are one-and-a-half.

The busdrivers in Veszprém will be able to work in an orderly, transparent environment with the known MAN designed dashboard and instrument cluster.

With the generational change of the Lion's City series in 2018, MAN released the long-engined reciprocating engine layout. The Veszprém cars feature the stationary, six-cylinder, 9-litre MAN D1556 LOH diesel engine with 206 kW (280 hp) with a maximum torque output of 1200 Nm. The articulated version has 243 kW (330 hp) and 1400 Nm. 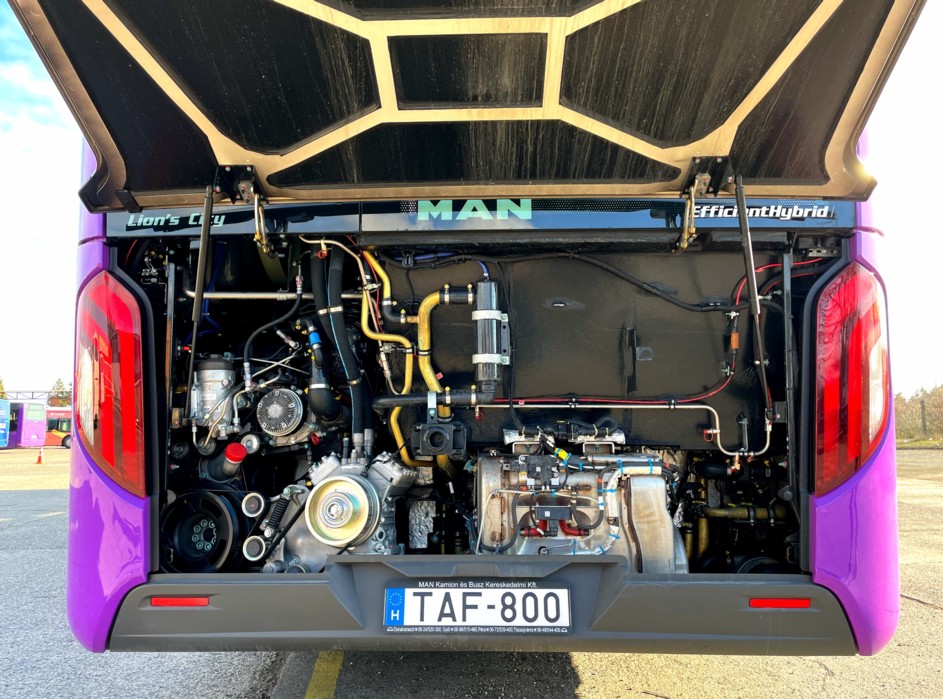 The main feature of the powertrain is the mild hybrid module. The system is essentially based on a starter generator built into the engine and torque converter, which, in addition to acting as a starter motor, assists the diesel engine when starting and accelerating, reducing its load and thus consumption. In addition, during braking, it provides an opportunity to recover some of the kinetic energy in electrical form, which the system stores in a ultracap in the upper left corner of the roof. The buses are equipped with a four-speed automatic transmission, the Voith DIWA 854.6 unit in the solo cars and the Voith DIWA 864.6 unit in their articulated counterparts. The maximum permissible gross weight of solo buses is 18,300 kg. Veszprém is blessed with a rather two-faced road network - roughly half of the city roads have good quality pavement, the rest bring the shameful standard we are used to in Hungary - but during our test drive by bus, the rumbles of the passenger compartment remained restrained.

The complete replacement of the V-Bus fleet is of paramount importance to both the city and MAN. The latter thus acquires an important reference in Hungary and it can also say that it serves a Hungarian county exclusively with its products. Veszprém, on the other hand, is suddenly becoming a leader in the country in terms of the quality of its local bus fleet, and it can prepare to carry the title of European Capital of Culture in 2023.